Check Out Cool New App: Clapit! It Allows for Content Curation & Trends Based on YOUR Votes!

Launching this month, clapit is a new social network where users clap what they love from everywhere that great content lives. Available for free download from the iOS store, clapit allows users to crowdsource and curate their favorite music, videos, podcasts, web links and more by clapping – sharing the most compelling content with the world. 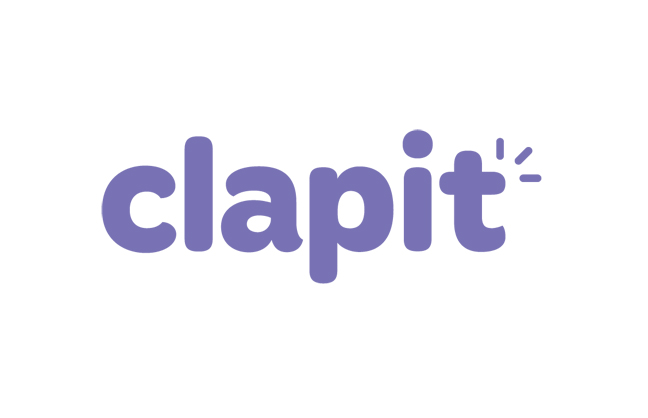 “clapit makes social media human again – moving away from algorithms and advertisements and letting the clapit community decide what is trending,” said Paul Bedwell, clapit co-founder and CEO. “Rather than competing with existing social media, clapit embraces them. clapit provides a place where users can cut through the noise and get an overview of today’s best content from across apps and websites.” 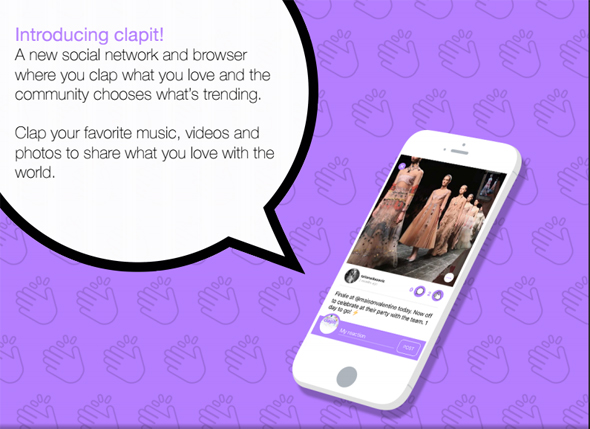 With one simple clap, users pull in the best content from across the web and other applications – SoundCloud, YouTube, Facebook, Twitter, Vimeo, Flipboard, iTunes, and all web links including e-commerce sites. Once within clapit, content enters into a content democracy, and is voted on by other users using the most human endorsement: a clap. Content with the most claps moves to the top of the global BEST feed, which is refreshed daily. clapit uses no algorithm within the application,

In addition to viewing content, clapit users can instantly react to content using a selfie-reaction, where you take a selfie of your expressive response – a truly human reaction to content for a more authentic visual dialogue.

clapit is a free app in the iOS store. With one simple clap, users crowdsource the best content from everywhere, where it enters a best content democracy on clapit. Videos, podcasts, images and music with the most claps move to the top of the global feed. Rather than competing with existing social media, clapit embraces them. Providing a place where users can cut through the noise and get an overview of today’s best content from across apps and websites (i.e. Facebook, Twitter, Instagram, Flickr, Vimeo, FlipBoard, iTunes, SoundCloud, iPhone photos, and more). 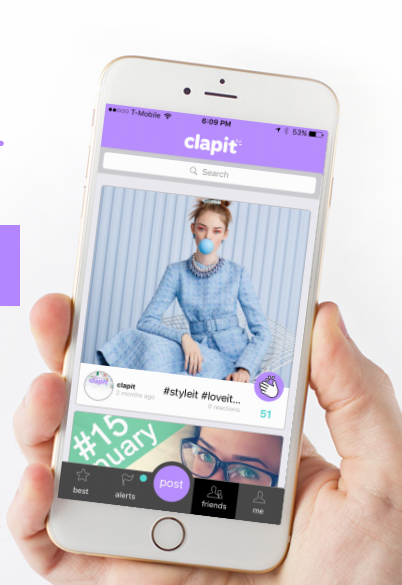 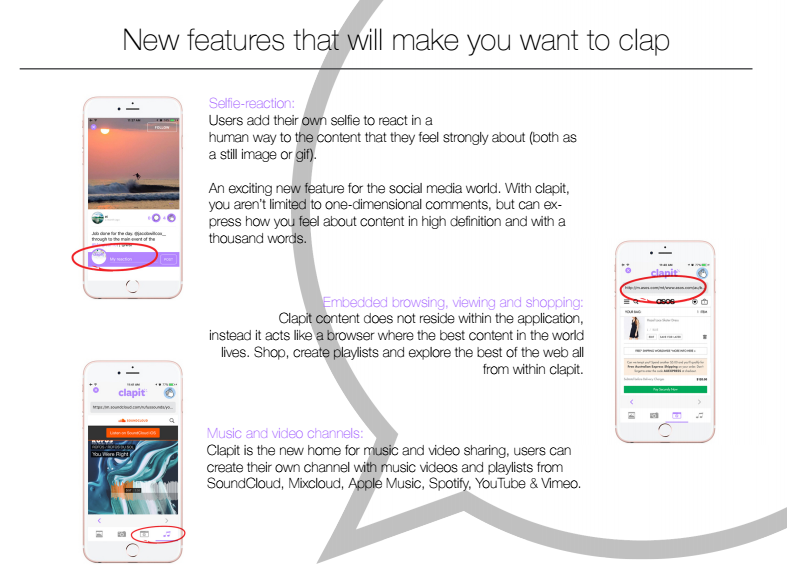 clapit content does not reside within the application; instead it acts like a browser where the best content in the world
lives. Shop, create playlists and explore the best of the web all from within clapit.

To celebrate the launch of this app on 5/25, the clapit team has partnered with Muse Modeling Management to create the #makemeamuse competition – a search for America’s next muse. Premised on the belief that being a (role) model isn’t just about beauty, but also self-expression, entrants apply through clapit for the chance to become the global face of clapit and win a 3-year contract with New York-based Muse Management Inc. See all details at this link. 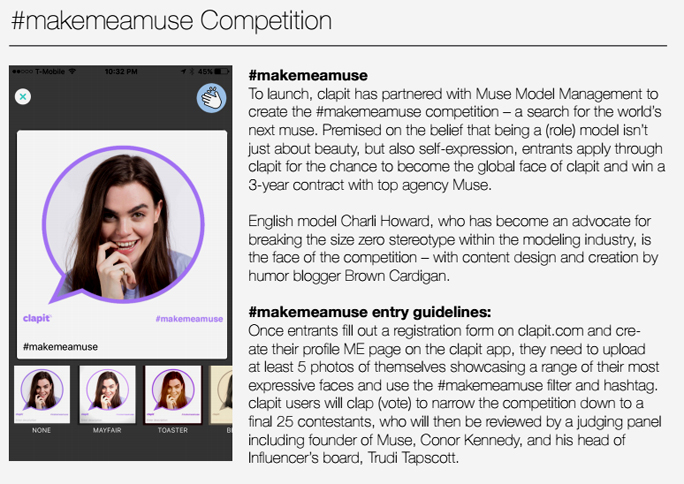 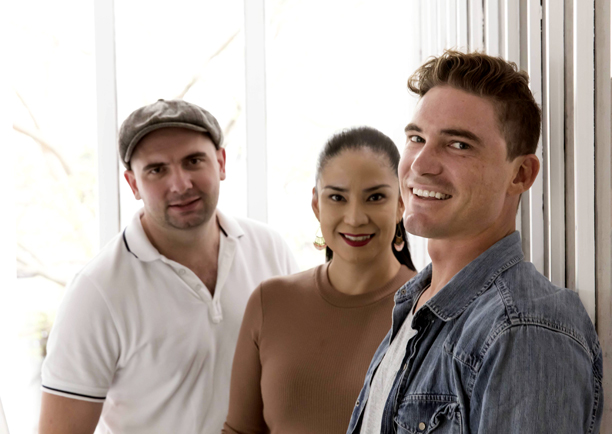 As co-founder and CEO of clapit, Paul J. Bedwell’s unique path to entrepreneurship started with surfing, ran through
medical school and was galvanized by work as a youth mentor.

Paul grew up in Stanwell Park, a coastal village in New South Wales, with a love for surfing. He later became a physician with expertise in clinical medicine and research. Following medical school, he became interested in population health and moved to Africa where he worked for Kenya Aid, an Australian not-for-profit dedicated to supporting communities with sustainable health and education programs. He then joined a global healthcare leader where he researched health information technology for diabetes, hypertension, heart failure, and severe asthma.

During his spare time, Paul surfs and volunteers as a youth group mentor in Sydney. After seeing firsthand the positive and negative influence of social media as a youth counselor, he recognized an opportunity to create a new social media tool and community. Additionally, he continually searched for ways to share the best new products or content – whether it was a newly discovered RipCurl Flashbomb wetsuit or empowering individuals with a positive platform to showcase their work. Rather than competing with existing social media, he created clapit as a best content democracy – focused on applauding the best new content found anywhere on the web to complement and enhance existing social media and browsing activity.

Mary Jane Bulseco, clapit’s co-founder and CMO, became fascinated with entrepreneurship, business and number crunching as a teenager. She started planning her first purchase of property at age 14, but had to wait until she was old enough to legally do so.

At the age of 19, she bought her first property, which she grew into a multi-million dollar residential real estate portfolio over the course of 8 years. Building on her success, she expanded into startups, where she led the children’s pay-for-play industry through a number of ventures, among them Kidsportz Play Land and Lollipop’s Entertainment Quarter.

Throughout her career, Mary Jane has leveraged technology to power her businesses. This led her to explore application development. While supporting the early development of an e-commerce application, she and the clapit founders came together with a shared vision for creating a best content democracy community for the web.

Mary Jane studied law at University of New England (UNE) in New South Wales, though never completed due to her entrepreneurial pursuits. Born in the Philippines and raised in Australia, she stays connected to her roots by supporting orphanages in her country of birth the Philippines and service work for her community in Sydney.

Stan Tsvirko, clapit’s co-founder and CTO, is a digital specialist and lifetime techie.

After getting invited to join the Golden Key International Honors Society for graduating at the top of his class with a Masters of Technology (Business Systems) at Swinburne University of Technology, Stan was promoted within Novartis Australia where he currently holds the position of digital specialist. He is responsible for managing Novartis’ Multichannel Marketing (MCM) programs for the web, email, mobile, social media and other emerging platforms, while supporting brand development within a digital environment.

Using his knowledge and passion in user experience design (UX), disruptive technology and human computer interaction, Stan has been instrumental in developing clapit from an idea on paper into a viable technology platform.

Stan grew up as a true digital native, programming from an early age while teaching himself to build PCs from scratch using scavenged parts. Stan’s family claims the first language he learned was binary. He started his career as an experimental researcher for CSIRO in the developing field of oil shale exploration and then moved to healthcare technology where he spent over eight years working for some of the biggest pharmaceutical companies in the world. Stan has a Bachelor of Science (Chemistry) and a Masters of Technology (Business Systems) from Swinburne University of Technology.

Thank you to clapit and it’s team for the scoop on this new app! It’s REALLY cool! It’s going to change the way you curate and see content! I can’t wait till the app is available for Android. (coming soon!)